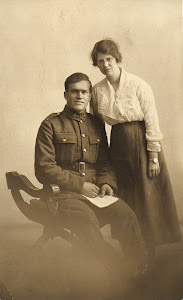 Great Blog! Good to see someone is doing something about this neglected part of our history. I see a few familiar pictures and experiences here. I don't know if my grandmother is technically considered a war bride since she knew my grandfather since early 1900s. My grandfather emigrated to Canada to homestead in 06, joined the CEF and off to war in 1916. When the war ended they were married in 1919 and sailed to his homestead in Saskatchewan where they spent the rest of their lives. I have many letters and postcards they exchanged over the years. A few of them show up on my blog at http://mindlessramblings-rlg.blogspot.com/